Heiko Zemmler has found the company ZEMMLER and has started renting machines, selling spare parts and selling used screening machines of the Vedbysonder Maskinfabrik and of the swedish manufacturer Svedala.

At this time he already has years of experience as service technicians for trommel screening machines.

A close cooperation while developing the MS 2001 by the Danish manufacturer Ellegaard leads to Heiko Zemmler subsequently working as a distributeur for the company. Additionally, Mr. Zemmler starts selling, renting and offering spare and wear parts for Ellegaard’s MULTI SCREEN Germany-wide. With the recruitment of three employers and purchase of the production location in Großräschen, the company was capable to produce spare parts and complete assemblies (for example the double trommel) for the screening machines of Ellegaard.

Heiko Zemmler gains the rights of MULTI SCREEN® and Ellegaard stops its production. The operational requirements lead to the direct production start of MS 2001 at Großräschen ground – production „Made in Germany“. Already at the end of 2007 / beginning of 2008, the first Zemmler screening machine left the production. The foundation stone for an entire production line and further developments has now been laid. 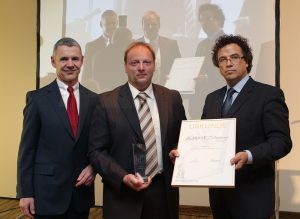 The company is awarded by the Brandenburg Future Prize.

In the meantime, the product portfolio comprises 5 types of machines, both mobile and stationary versions from MS 1600 up to the MS 6700 with a screening capacity of 30 m3/h up to 180 m3/h.

Zemmler celebrates 15-year company anniversary. By now, the company has a broad-based dealer network in Germany and Europe, a nationwide rental park, used machine trade and spare parts service for screening machines. More than 100 machines are already being produced at the production location in Großräschen.

Limited capacity at the production location in Großräschen and a growing demand of double trommel screening machines causes Zemmler to purchase larger production halls in the 20 km distant Massen-Niederlausitz (Brandenburg). Zemmler Siebanlagen develops the MS 1600 Starter and extends its portfolio for smaller businesses.